Ok - I have a thing for the tower defense type web games.  Onslaught is just one of several that I spend a bit of time playing here and there.   I recently came across another great tower defense style game - Gemcraft. 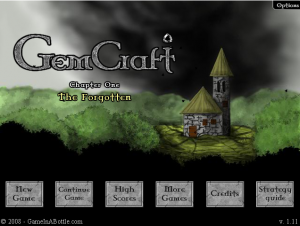 In GemCraft, you place gems on towers to shoot the baddies that are trying to get to your base.   Each type of gem has a different effect on the baddies that it hits, from slowing them down reducing armor and everything in between.  There are eight different gem types in all, and effects can be combined to provide multipurpose gems.  Multicolor gems are not as powerful as the "pure" gems, but there is always a purpose for them.

In addition to pure tower defenses with the gems, you can also throw the gems as bombs on the baddies.  This is a great way to clear out groups of baddies that have managed to slip through your defensive ranks.

Your score on each level is used to provide a rank in the game.  As you advance through the ranks, you get skill points that allow you to upgrade and enhance your defensive abilities.  These upgrades are essential to maximize your score on all levels and survive at all on the later levels.

I have finished all of the levels in the game and I'm currently at level 81, with a score of 240 million.  Played this game?  Post a comment with your thoughts and scores.

Well, its been a few months now, and my little city is still growing slowly and steadily.  The city is currently large enough to have multiple components that need to be built up together.  Due to my neglect, The city is currently in need of industry and transportation.   Of course people help too, but the others are needed more at this time.

Do you have a minicity?  Feel free to link to it in a comment.